Status and outlook for the electricity market

ATEB’s analysis of the status and outlook for the electricity market in Bulgaria is published in Utilities Magazine issue of August/September 2019.

In recent months, the electricity market has become a leading topic. The main reasons for that were the adopted amendments to the Energy Act (EA), the price spikes on the Independent Bulgarian Energy Exchange (IBEX) and the proposed new amendments to the Energy Act. Changes of the regulatory framework from May 2019 have removed the fees for export and import of electricity and created opportunities for market coupling with neighboring countries. During the same month, the prices of electricity on the Bulgarian energy exchange started to rise, due to the overall price increase in the region and the annual overhaul of the 5th reactor of Kozloduy NPP. We witnessed extreme spikes on the DAM, some days Bulgarian prices significantly exceeded the regional rates. This, together with the abolishment of the import fee, contributed to an increase in gross imports and created competitive conditions for the supply of electricity from neighboring markets (Figure 1). 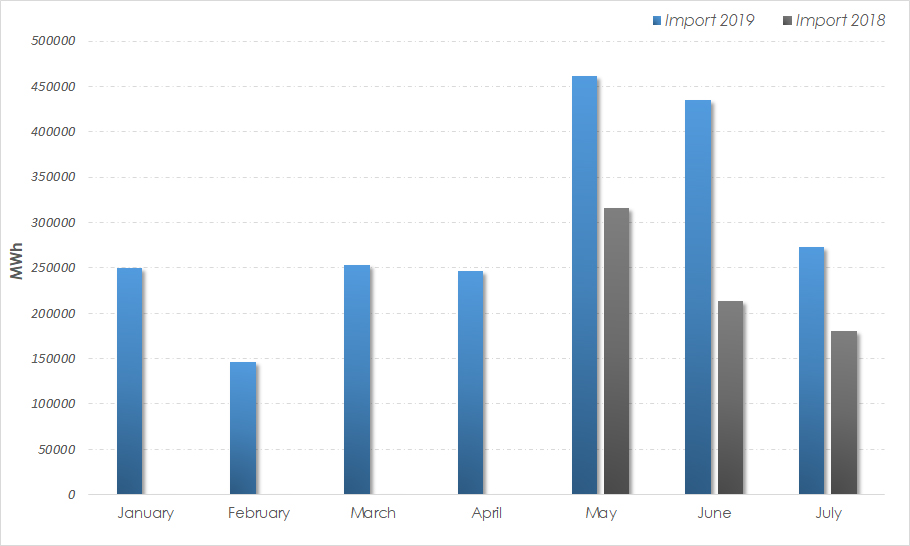 Major legislative change was the mandatory participation on the liberalized market of generators from RES and CHP with installed capacity equal or exceeding 1 MW. The expectation of some market participants was that this “new” offering would put downward pressure on the exchange prices. Until the changes came into force, the electricity from these generators was covering the needs of the regulated market. Following their compulsory participation on the liberalized market, the “shortage” created on the regulated market was replaced by a supply from the Kozloduy NPP. Thus, 1 100 000 MWh of cheap electricity from Kozloduy NPP with a base profile was replaced by more expensive electricity from RES and CHP with a variable profile.

In the last year, despite the efforts towards complete liberalization, there was an inverse trend, a substantial return of low voltage business consumers to the regulated market. Such developments have led to an increase in the share of the regulated market and the need for additional volumes for this segment, which were provided by TPP Maritsa East 2 after a special order issued by the Minister of Energy. The operation of the same plant TPP Maritsa East 2 is of great concern given the accumulated financial losses and the high generation costs of 135.3 BGN/MWh[1]. The main reason for the condition of the coal plant is the increase in the price of emission allowances from 8 €/tonne at the beginning of 2018 to 27 €/tonne in August 2019. Those expenses are significant and contribute to the reduced production from TPP ME 2 during this year. Figure 2 shows that the plant operated only on 40% of its capacity, exceeding this value in the first two months of the year and in May and June during the planned annual overhaul of the 5th reactor of Kozloduy NPP.

Figure 2. Daily generation from TPP Maritsa East 2 as a percentage of the maximum capacity and baseload prices on the DAM of IBEX

Moreover, 2019 is very dry year, resulting in limited water supplies in the dams and reduced hydroelectric production by 34.1% compared to the previous year. The facts listed above have led to a situation in which the most significant volumes for the liberalized market during the spring and summer months were provided by RES generators and Kozloduy NPP.

The development of the regional prices had an impact on the prices of the Bulgarian power exchange, since the country is connected to certain extend with the other markets the prices of IBEX cannot differ significantly from those on the neighboring exchanges. Moreover, after the abrogation of the import and export fees, IBEX prices are approaching those of Romanian OPCOM, with the average difference between the two exchanges already being 0.38 €/MWh, for comparison in 2018 it was 6.6 €/MWh. At the same time, in July the quotations of the regional futures for the fourth quarter were between 60.11 and 65 €/MWh, while at the end of August there was a decrease to 55.75 €/MWh for delivery in Bulgaria. However, these values ​​are still above the price levels in 2018.

At the end of July, between the readings of the bill for further liberalization of the gas market, proposals were submitted to amend the Energy Act in regard to the electricity market. Those proposals plan to eliminate the possibility for the balancing groups to merge with a common financial settlement Furthermore, the amendments include a requirement for generators from RES and CHP with capacity over 1 MW to sell electricity only on the short-term platforms of the exchange – day-ahead and intraday markets. Both proposals are controversial, according to a majority of market participants, will lead to higher electricity prices for the end consumers and will increase the volatility on DAM.

The merging of the balancing groups has contributed to reduction of the costs for balancing energy and improved the competitiveness of the liberalized electricity market. This is achieved, because different consumers and power producers can join into sub-groups, under one common coordinator. Due to the diverse profiles of participants in these balancing groups, an effective netting of their imbalances and a reduction of the overall imbalance are realized. The end result is savings and reduction in balancing costs. If the merging opportunity is abrogated, it will not be possible to effectively offset the imbalances, which will lead to increased costs for participants and withdraw of smaller coordinators from the market. Without merging, situations are possible in which same imbalances are covered several times by different coordinators.

The planned restriction on RES and CHP producers puts them in unfavorable position compared to conventional power producers who can benefit from all IBEX trading platforms. Such a ban on long-term contracts will cause financial instability for companies, because they will not be able to secure long-term purchases of electricity. Only on the bilateral trading platform, long-term contracts with fixed price and can be concluded. This is for the benefit of both sellers and buyers, as well as the market. Purchased quantities under bilateral contracts do not participate in the DAM and have no contribution to price volatility; on the contrary, they provide price stability and predictability. The full take-up of RES on the DAM will increase the days with drastic price differences due to the variable nature of RES production, which is highly dependent on the weather conditions.

Key findings and recommendations from the sectoral analysis of CPC

New group of electricity consumers will enter the liberalized market

Ministry of energy published the National Energy and Climate Plan

The preparation of ENERGY INFO BG 2020 is underway