European power markets during the first quarter of 2020

The report on the electricity markets for the first quarter of 2020 of the General Directorate of Energy at the European Commission states that despite affecting directly the EU electricity system for only a few weeks in March, the long shadow of the global health crisis hangs over the results of the whole first quarter 2020. Combined with the effect of a very warm and windy winter, the widespread lockdown measures imposed to slow down the spreading of the coronavirus reduced electricity consumption in the EU27 by 3% year-on-year, surpassing the estimated contraction in economic activity during Q1 2020. Demand destruction reached its peak in April, after which a gradual recovery begun. However, consumption still remains measurably below pre-crisis levels on average. The demand shocks observed in Italy, France and Spain during the quarantine period were unprecedented both in scale and duration. The shift away from fossil fuels caused the carbon footprint of electricity generation in the EU27 to decrease by 20% year-on-year in the first quarter, according to preliminary estimates.

The first quarter witnessed dramatic changes in the structure of the EU27 power mix. Fossil fuels were caught in the pincer movement of falling demand and rising renewables. Coal generation bore the brunt of the pressure, falling by 30% year-on-year (-38 TWh). Gas was unable to capitalize on coal’s demise and suffered losses as well (-3 TWh). Coal-to-gas switching quickly gave way to a wide grey-to-green shift. Thanks to recovering hydro output and record high wind generation, renewable energy sources had a very successful quarter, expanding by 38 TWh year-on-year and reaching a 40% share in the power mix, their highest quarterly figure to date. Not even nuclear energy was spared by the weakening demand and rock-bottom wholesale prices. Reactors in Sweden, France and other countries had to be taken offline or significantly ramped down. All in all, renewable generators were the least affected by the crisis and came out of it relatively unscathed. Overall, networks coped with the crisis well and proved their ability to handle increased levels of renewable penetration

As a result of falling demand and rising renewable generation, day-ahead electricity prices plunged across the continent, bottoming out in April at all-time lows. The decline in forward prices, which form an important component of retail prices, was much less pronounced. At the end of May 2020, baseload power for year-ahead delivery in major European markets settled some 5-7 €/MWh (roughly 10-15%) lower than in 2019. While in the past two years the market expected wholesale prices to generally fall in the future due to higher renewable penetration, this has reversed lately. Prices are expected to climb up on the back of the recovery.

Prices of coal and gas went down in the reference period compared to the previous quarter, but the fall in gas contracts, both spot and on the forward curve, was twice as large as in the case of coal. This boosted the advantage of gas vis-à-vis its dirtier competitor in the generation mix and contributed to the continued decline in coal-fired electricity generation.

The European Power Benchmark of nine major markets averaged 30 €/MWh in the reference quarter, down 28% compared to the previous quarter. The cheapest baseload power prices were observed in the Nordic region. Even though wholesale prices were falling across different regional markets in Q1 2020, divergence levels increased considerably as the decline in prices in countries and regions that traditionally have cheaper electricity was greater than in markets where wholesale prices are typically higher. Sharp and sudden price drops drove traded volumes to the highest quarterly level on record. 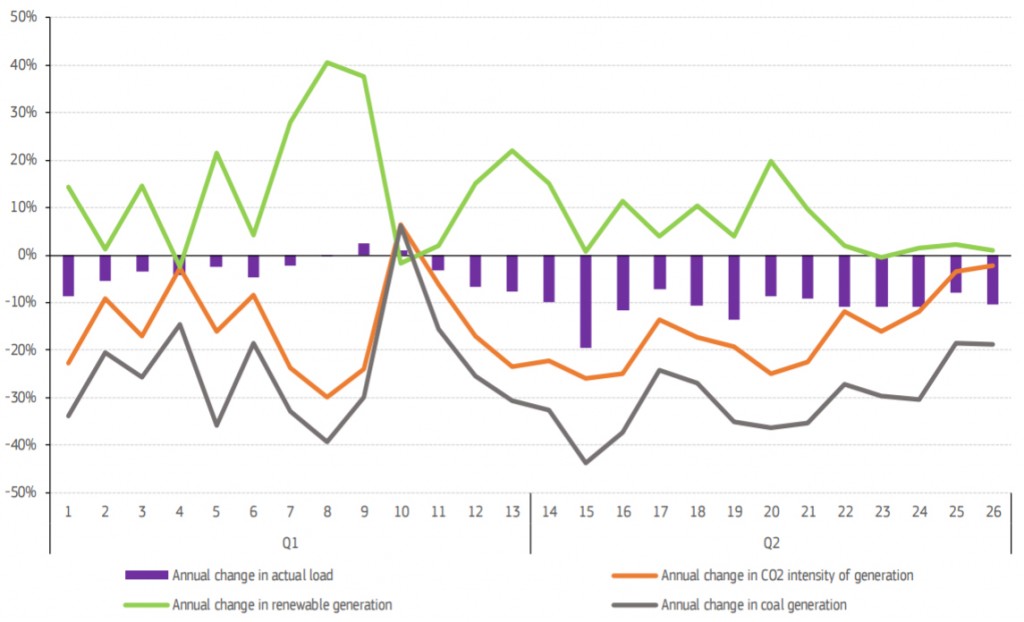 Figure 1 – Weekly development of annual changes in actual load, renewable and coal generation and CO2 intensity of the European power mix in 2020

Figure 1 shows changes in weekly actual load (a proxy for power demand), renewable and coal generation and CO2 intensity of the European power mix between 2019 and 2020. During most of the reference quarter, the carbon footprint of electricity generation was significantly lower than in the same period last year due to lower demand and higher renewable generation, both of which reduced runtimes of coal- and gas-fired power plants. The only exception was the beginning of March when a cold spell drove electricity consumption up and a limited availability of renewable sources opened more space for fossil fuels in the merit order. For the whole Q1 2020, the power sector’s CO2 emissions in the EU27 were estimated to fall by 20% compared to the same quarter a year before.

The highest average prices in Q1 2020 in the EU27 were registered in Greece (50 €/MWh) and Malta (45 €/MWh), followed by Bulgaria (42 €/MWh), Romania (41 €/MWh), Hungary and Poland (both 41 €/MWh). Some of these countries traditionally rely on imports of electricity (Greece, Hungary), some have limited cross-border transmission capacities (Malta, Greece), and some faced falling domestic output from lignite sources burdened by elevated carbon costs (Poland, Greece, Bulgaria, Romania). The lowest quarterly wholesale prices were recorded in Norway (15 €/MWh) and Sweden (17 €/MWh), where high hydro reservoir levels and rising wind generation kept baseload contracts in check. 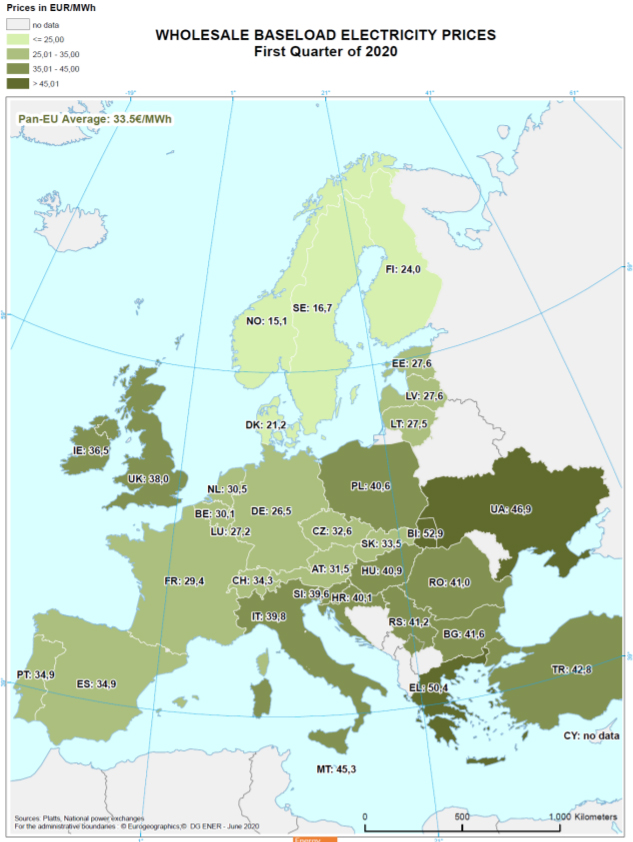 Тhe trade-weighted monthly average baseload prices in the SEE region headed lower during the reference quarter, driven mainly by falling prices across the region and mainly in Greece (by far the most liquid market). In January, the supply-demand balance tightened slightly amid high demand and falling lignite generation burdened by increased carbon costs. The situation improved markedly during the rest of the reference quarter, in line with typical seasonal patterns. The regional monthly average finished the quarter below 39 €/MWh, the lowest level since August 2016. Bulgaria witnessed more volatility and a decrease of 11% compared to Q4 2019. Greek daily spot prices distinctly diverged from the rest of the region in February and even during the lockdown in March, keeping their distance at about 10 €/MWh towards the end of the quarter.

Investments in the energy sector part of the recovery plan

Sanctions methodology for market violations is in force