Uncertainty in the energy markets

The article is published in the June issue of Utilities magazine.

While in the last year we witnessed a decline in consumption and a collapse in the prices of electricity and energy products, this year the situation is completely different. In the last 3 months there has been a significant increase of wholesale electricity prices not only in Bulgaria but throughout Europe. For the months of March, April and May is typical lower consumption, good water levels and increased production from renewable energy sources (RES). These factors are a prerequisite for stable supply and low prices. So in the last 4 years during this period the electricity prices on the Bulgarian energy exchange (IBEX) were on average 64 BGN/MWh.

In 2021, however, the situation is contrasting and during those spring months high electricity prices are achieved on the Bulgarian market. On average for the period a value of 113 BGN/MWh is reached, which is almost two times higher than the typical. The surge in pricing began in March and April and was dictated by the unexpected low temperatures followed by an increase in demand. In the second half of April, despite the weather stabilizing and consumption declining, prices continued to rise and reached new records for the spring period. The leading factors were the rising prices of emission allowances, natural gas, coal and other energy commodities. In combination with annual repair of several generation units, e.g. reactor 6 of Kozloduy NPP the price pressure on the market intensified.

The trend has continued and is relevant at present as the futures markets of European energy exchange and the Hungarian derivatives market are showing. Additional problems on the Bulgarian market related to insufficient supply and emergency reduction of the operation of Kozloduy NPP have contributed to Bulgaria becoming price record holder in Europe on certain days.

Financial institutions have become an important factor on the energy markets. Movements in the prices of energy commodities on global markets are becoming increasingly influenced by various financial players (banks, funds, etc.). In the last year, there has been a clear investment interest in energy commodities. More and more platforms are offering services to smaller players to engage in commodities trading. As a result, additional capital is accumulated on the market, which is used for speculation and not for physical deliveries. Such actions lead to artificial price increases and volatility.

It is interesting to note that in the last month the trend for growing electricity price has been interrupted by a significant decline of about 10% in just a short period of 2 days (May 18 and 19). This is true for the electricity market (Figure 1), natural gas market (Figure 2), environmental markets (Figure 3) and others. It is puzzling that this decline is not based on fundamental changes related to the respective markets. On the other hand, is important to note that in the same period there was a large decline of over 20% in the price levels of leading cryptocurrencies. Whether there is a link between the two is not entirely clear, but it is a fact that movements in various investment markets, such as commodity markets, cryptocurrency markets, stock markets, are influencing energy prices. 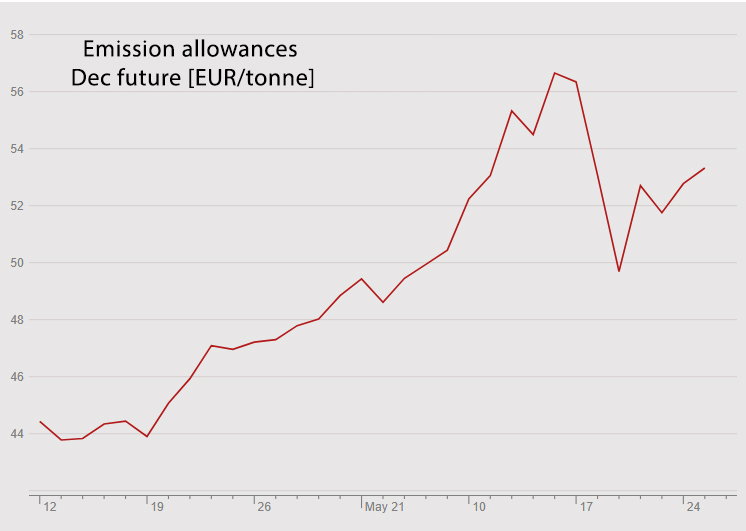 Considering a long-term price uncertainty and the danger of high prices being the new normal, a number of companies, including electricity traders and end customers, start to invest in renewable energy power plants. In the near future it is very likely to witness a second big wave of such projects in Bulgaria. For 2021 there are applications for connection of approximately 2000 MW of renewable energy. Last year, despite the pandemic and low electricity prices, there was an “awakening” of the RES market with new installations having a total capacity of over 100 MW. A challenge for this type of projects, especially regarding larger plants, is to ensure a power purchase agreement (PPA). In Bulgaria new RES power plants do not receive a feed-in tariff and are entirely relying on electricity market prices. Thus, signing a PPA with traders or end customers guarantees developers a stable cash flow for longer period. These contracts are of key importance for the implementation of RES projects, securing financing and minimizing merchant risks.

We are currently in a period of uncertainty and awaiting to see the long-term trends in energy markets. Increasing integration and interdependencies between markets made it harder to distinguish between local and global markets. The electricity market in Bulgaria is no exception, as the global factors are already those dictating the price levels in the country.

Energy topics in the discussions for a new government

Higher electricity prices triggered by changes in the balancing market

Changes in the Price Methodology of Suppliers of last resort

New wind, photovoltaic and gas capacities in Bulgaria by 2030