New wind, photovoltaic and gas capacities in Bulgaria by 2030

The forecast for the development of the production capacities in Bulgaria until 2030 is based on the investment intentions expressed by production companies. Regardless of the investment intentions of the companies, they have been aligned with the forecast of installed capacities in the “National Energy and Climate Plan”. It is planned to gradually build new generation capacities on the existing site of Toplofikatsia Sofia, as well as in the Lyulin and Zemlyane plants. 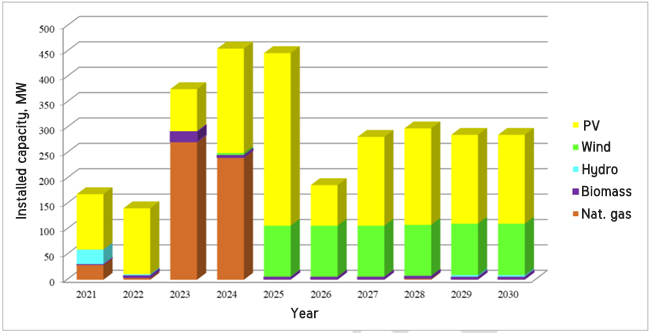 For the period 2021-2030, according to the investment intentions, a total of 2923 MW of new capacities are planned for construction, 2368 MW of which are RES.

ESO notes that based on statistics from previous years, extreme winter loads occur due to very low temperatures, combined with strong winds. In these cases, the wind generation helps to cover peak demand. More critical for the system are the instances in which there are very low temperatures and still weather, respectively low wind generation. This creates problems with managing the balance between consumption and generation, as well as problems with maintaining voltage levels in northeastern Bulgaria.

Future power balances show a drastic disparity in the capacity for covering domestic consumption and export of electricity. The latter is not only impossible in winter periods, but in some years even involves the use of all available sources of additional services (cold reserve) and/or imports of electricity. The situation is even more aggravated by the combination of prolonged extreme winter conditions, depleted primary energy resources in HPPs and TPPs and increased emergency repairs at power generation facilities, as was the case in January 2017.

For the first time, the development of the plan takes into account the influence of the Turkish power system on the flow distribution in the region. The forecasts of the Turkish operator are for a large growth of new power plants, with low price of electricity and the possibility for year-round exports. At the same time, the Bulgarian electricity system does not envisage investments in new large-scale generation projects, available 24 hours a day, which do not emit greenhouse gases. This could lead to an increase in the transit flows of electricity through our transmission network in the east-west direction and could make the Bulgarian-Turkish and Bulgarian-Serbian border bottlenecks that would restrict electricity trade. The transit of electricity through the country would become even greater, with a reduction of the production capacities in the complex “Maritsa East”.

Disruption of gas deliveries from Gazprom to Bulgaria