The quarterly report of the DG Energy for the second quarter of the 2018 showed that in April 2018 the share of renewable sources in the EU electricity generation rose to 38%, being the highest ever, owing primarily to good hydro and wind generation in most of Europe. Average wholesale electricity prices at EU level stood at 44 €/MWh in the second quarter of 2018, which was comparable with the average of the previous quarter, but up by 18% in year-on-year comparison. In April 2018 however, the weather was milder than usual, contributing to decreasing residential demand for electricity and low monthly wholesale electricity prices in most of Europe. In contrast, high temperatures in June 2018 increase demand for electricity and wholesale prices in many southern and eastern European countries. Among factors impacting electricity generation costs, natural gas prices increased slightly over Q2 2018, but were up significantly in year-on-year comparison, getting support from bigger injection needs in storages after the depleting impact of cold March weather, and from rising oil and carbon prices. Coal prices rose significantly over Q2 2018, owing to strong global demand for coal, especially in the Asian markets. Carbon prices kept on increasing in Q2 2018, however, in June market sentiment on trade issues between the EU and US weighed on the carbon price, as potential US tariffs on carbon intensive industries might reduce their output and demand for emission allowances. In consequence, coal and gas consumption in power generation in the EU fell further in Q2 2018, as increasing coal, gas and carbon prices did not contribute to any improvement in the profitability of fossil fuel technologies.

In the second quarter of 2018 wholesale baseload electricity prices reached 44 €/MWh (European Power Benchmark) on average in Europe, which represented an increase of 18% in year-on-year comparison. Comparing with Q2 2017, in the second quarter of 2018 prices increased by the most in Poland (39%) Denmark (38%) and Estonia (37%, whereas the biggest decreases could be observed in Romania (10%), Bulgaria and Croatia (both 4%). The highest quarterly average wholesale electricity prices in the EU could be observed in Q2 2018 in the United Kingdom (60 €/MWh), Greece (56 €/MWh), Ireland (55 €/MWh) and Italy (54 €/MWh). In contrast to the quarterly prices prior to this year, when market prices in the Scandinavian countries were the lowest in Europe, in Q2 2018 the lowest quarterly wholesale averages could be found in Bulgaria (34 €/MWh), Germany and Austria (both 36 €/MWh). 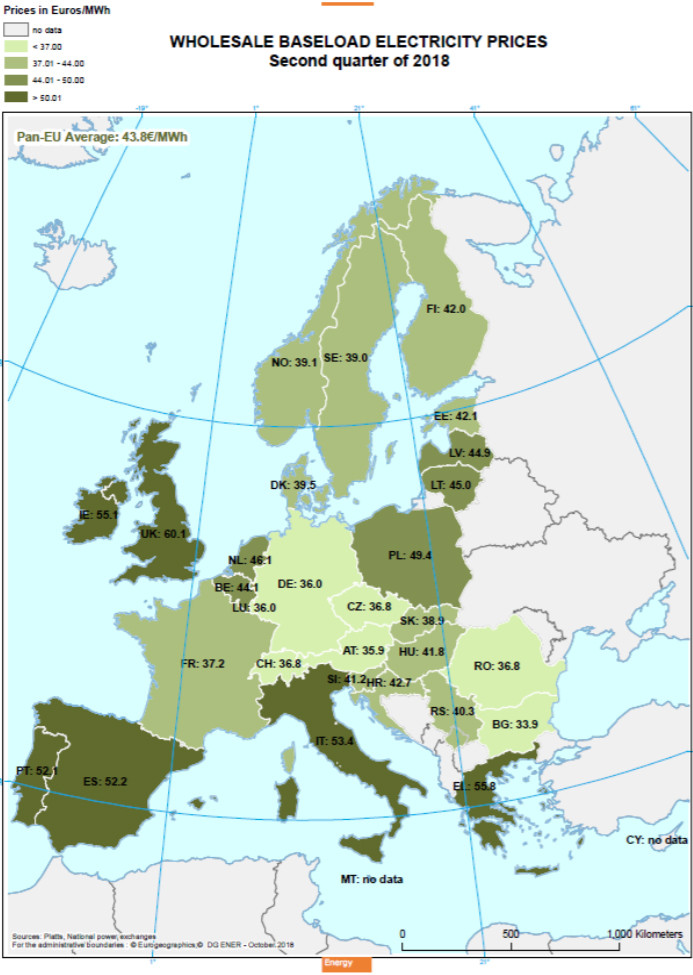 The regional average wholesale price contracts in Central and Eastern Europe (CEE) increased measurably between April and June 2018. The monthly regional average baseload price rose from 35 €/MWh to 49 €/MWh in this period, while the monthly peakload average went up from 39 €/MWh to 61 €/MWh, as Figure 34 shows. The regional weighted average of daily baseload price reached its trough on 1 May 2018 (Labour day) at 9 €/MWh (on this day the daily average price in Czech Republic and Slovakia fell below zero), and its peak (56 €/MWh) on 30 May 2018.

Similarly to most of the European markets, wholesale electricity prices in the South-Eastern Europe (SEE) region increased in the second quarter of 2018. While in April the regional average baseload and peakload contracts stood at 49 €/MWh, in June 2018 both averages were above 60 €/MWh. Baseload prices were the highest in Greece in the SEE region in Q2 2018, the quarterly average price in Bulgaria had a discount of 22 €/MWh, while in Serbia and Croatia prices were respectively by 15 €/MWh and 13 €/MWh below the Greek contracts. Looking at the daily average price contracts (see Figure 37), Greek prices showed a slow increase and were between 50 €/MWh and 60 €/MWh during most of the time the second quarter of 2018. In April and May 2018 baseload prices in Bulgaria, Croatia and Serbia remained well-aligned and followed an increasing trend, from the range of 20-30 €/MWh to 40-50 €/MWh. 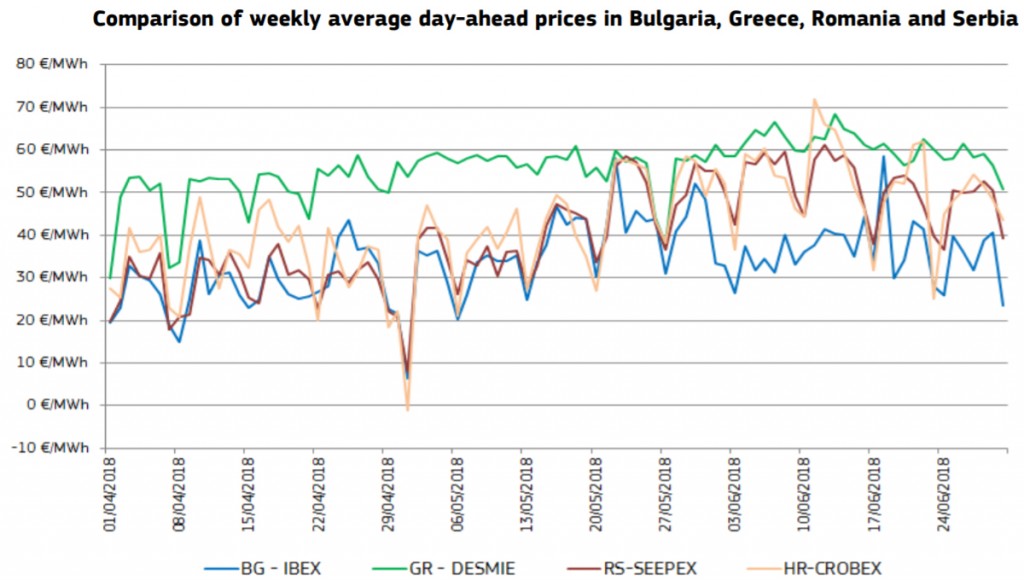 In June 2018 Bulgarian prices decoupled from the other regional peers and showed a significant discount to Croatia and Serbia. Low electricity prices resulted in increase of Bulgarian exports to the neighboring countries, mainly to Greece, Serbia and to the Former Yugoslav Republic of Macedonia. The prices for the local industrial consumers in Bulgaria – 7.42 eurocents/kWh remained one of the lowest in the EU, where the average was 11.42 eurocents/kWh. 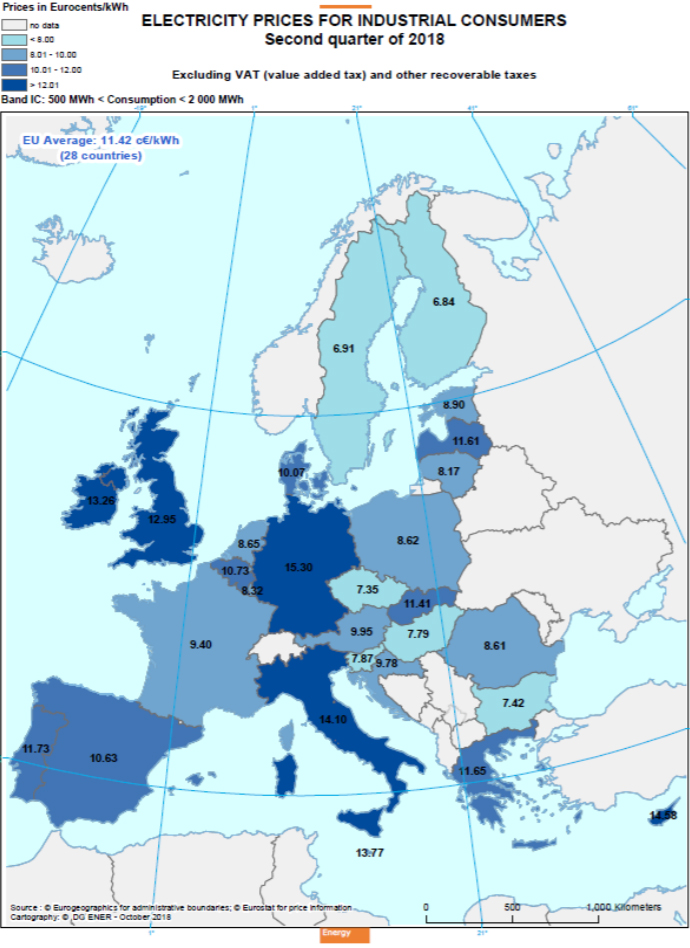 Governments are trying to weather soaring electricity and gas prices