The first quarter of 2022 was marked by the impact of the unprovoked Russian invasion of Ukraine, the associated international energy sanctions, and the fears of supply disruption on a market already tight. Following the peak in March, the wholesale electricity market has been reacting to announcements impacting the price of gas in Europe. In particular, it reacted to the risk of partial or total cuts of gas supplies from Russia and to the policy response from the EU and its Member States.

The rise in energy commodities prices, especially gas (marginal fuel used in the price setting of wholesale electricity prices), triggered record prices and high volatility during Q1 2022. The European Power Benchmark averaged 201 €/MWh in Q1 2022, 281% higher on yearly basis. Practically every national or regional market in Europe experienced a considerable surge in prices (changes ranged from 50% to more than 400%). Italy reported the highest quarterly average price (249 €/MWh), which was 318% higher than in Q1 2021.

The first quarter of 2022 saw a slight decrease (-1%) in electricity consumption in Europe, supported by a mild winter and the impact of high electricity prices. In Q1 2022, coal and lignite generation rose by 11% (+11 TWh), whereas less CO2-intensive gas generation still managed to grow 4% (+5 TWh). The share of renewables reached 39%, outplaying fossil fuels’ share (37%) in Q1 2022. However, the brunt of the losses in renewable generation came from hydro (-28 TWh), falling by 27% during Q1 2022 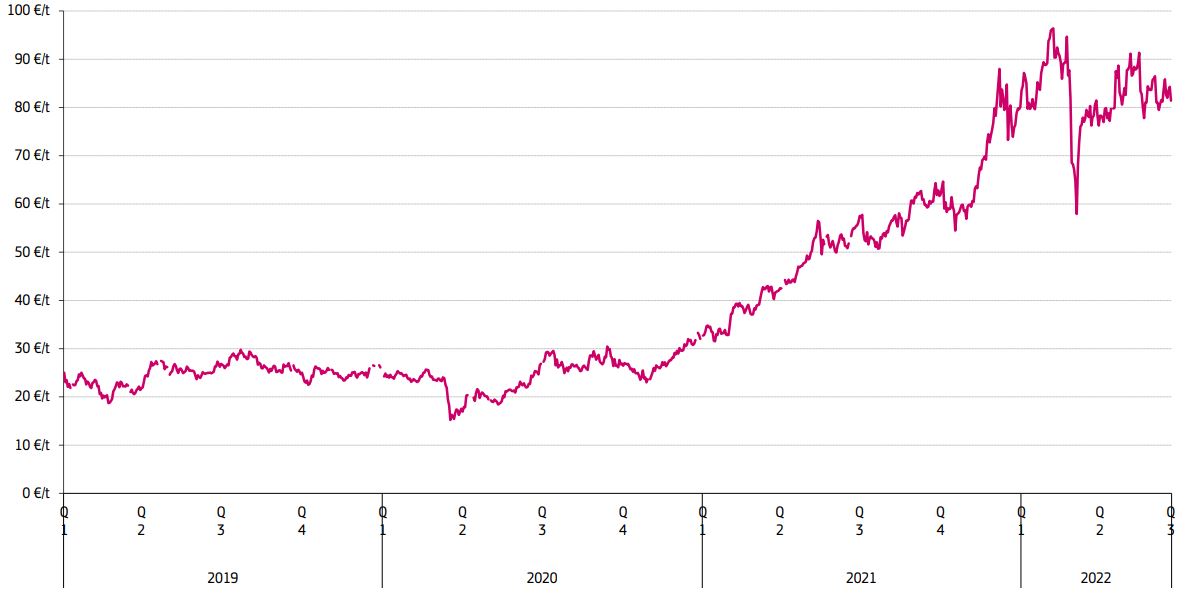 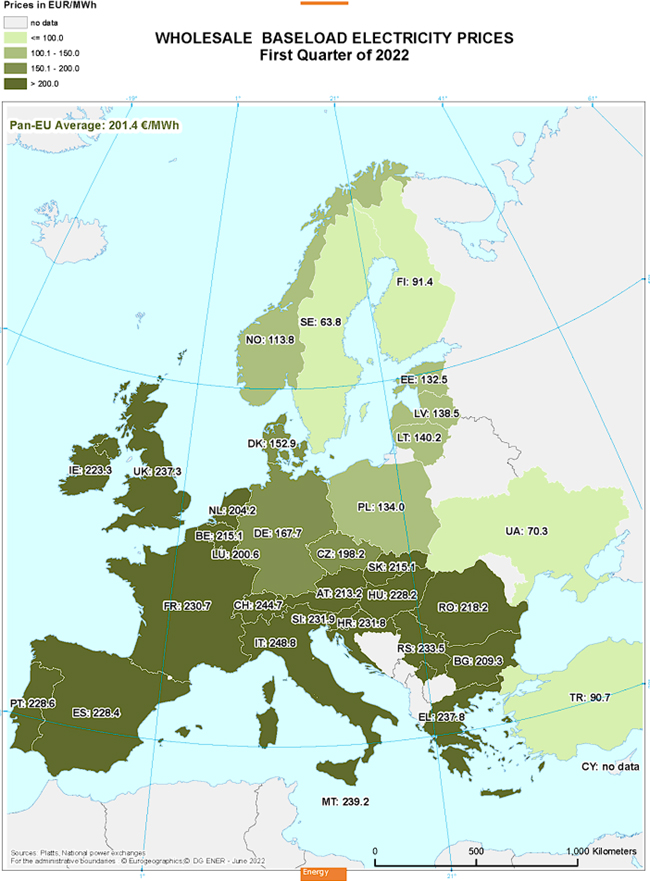 The largest year-on-year price increases in Member States were registered in Spain and Portugal (+411%), Greece (343%), and France (+336%). Conversely, Sweden experienced the lowest increase in prices during Q1 2022 (+49%) followed by Finland (+87%), due to lower dependence on gas in their power mix (less than 1% and 2%, respectively). Nevertheless, prices increased (yet less) due to subdued levels of hydropower output and high prices in mainland European markets.

Trade-weighted monthly average baseload prices in the SEE region climbed steadily after an ease in February, during the reference quarter. Peakload contracts reduced their premium over baseload to 12% in Q1 2022. Baseload average prices reached 268 €/MWh in March, exceeding all previous monthly record prices from the past years. Marginal costs of gas generation in countries like Greece, with high levels of generation from this energy commodity supported high energy prices, especially in March. The average quarterly baseload price rose by 335% year-on-year to 229 €/MWh in Q1 2022, 5% above Q4 2021 and 381% higher than Q1 2020. The average quarterly peakload price rose 318% above Q1 2021 levels to 242 €/MWh.

Production and consumption in 2022

Gas agreement between Turkey and Bulgaria