The first quarter of 2021 brought electricity consumption in Europe close to pre-pandemic levels, despite remaining restrictions on economic and social activity note the EC Quarterly (Q1, 2021) report on European electricity markets. However, part of the recovery stemmed from colder tempera-tures compared to 2020. EU-wide consumption increased by 2% year-on-year in Q1 2021, as increasing heat-ing load and recovering manufacturing industry were able to reverse low levels of consumption in other sectors of the economy.

The first quarter of 2021 was exceptional in several aspects. The long and cold winter of 2020/2021, fostered a recovery in electricity demand and made more space for fossil fuels in the electricity mix, in spite of increasing carbon prices. Despite lower average wind speeds across Europe, the share of renewables still managed to reach 38%, beating fossil fuels (35%) as in the last quarter of 2020.

Prices of emission allowances have moved decidedly above 50 €/tCO2 since May, putting coal and lignite power plants at a greater disadvantage against their less polluting gas-fired competitors. Several factors have combined to drive up prices. Expected scarcity is one of them, as the market is undersupplied in 2021. With the start of Phase IV of the EU ETS, the Market Stability Reserve is reducing the surplus of allowances while upcoming reforms to the EU ETS as part of the “Fit for 55” package are supporting a tighter market. Another bullish factor is added by the prospect of phasing out free allocation for industry with the introduction of a Carbon Border Adjustment Mechanism proposal. Cold winter spells in the first months of 2021 and a strong recovery in electricity demand, have also provided support to prices in the latest months. CO2 prices have already reached the level at which most older and less efficient hard coal and lignite power plants in Europe are no longer profitable to operate. As a result, early closures have been announced and carried out. High carbon prices also raise wholesale electricity prices as costs are passed into retail prices with some delay. The impact will ultimately depend on the composition of electricity prices in each market. In the medium-term, high carbon prices send a powerful signal boosting investments in renewable capacities. At current CO2 prices, it is cheaper to build a renewable generation source rather than keep state-of-the-art coal/gas power plants in most Member States.

Most electricity markets in the region saw wholesale prices returning to pre-pandemic levels during Q1 2021. Prices hit multi-year highs in early January (59 €/MWh) amid low wind speeds, lack of dispatchable capacities, increasing CO2 and gas prices, and strong demand due to cold weather. A similar event took place in the second week of February. Under the current transformation of the electricity system, such episodes are likely to be more frequent as renewable sources are variable by nature and conventional power plants are retired from the system. The European Power Benchmark averaged 53 €/MWh in Q1 2021, 79% higher on yearly basis. The rising trend continued in the following months on the back of extremely high fuel prices. In June, electricity prices in many markets, including France and Germany, reached 13-year highs.

Trade-weighted monthly average baseload prices in the SEE region fell in January and February, only to rebound in March. Baseload prices in the region were driven by Greek prices (by far the most liquid market in the region). Low demand, strong hydro and renewables kept growth of prices in line, compared with other regional markets. Nonetheless, the average quarterly baseload price rose by 11% year-on-year to 53 €/MWh in Q1 2021 and 2% above Q4 2020. The average quarterly peakload price, rose 16% above Q1 2020 levels to 58 €/MWh.

Greece became a net exporter in January on the back of strong hydro, renewable generation and a continued lag in demand. In March, Greek renewables led the generation mix as demand continued dipping. During Q1 2021, imports from Greece to Italy averaged 0.2 GW, a notorious contrast to the traditional imports flows seen in the past from Italy.

In Q1, 2021 electricity price inflation index, confirms that retail prices are likely to be under heavy inflationary pressures due to rising fuel and carbon costs The effect could be more marked in the case of businesses since wholesale electricity prices constitute a relatively large portion of their final bill. 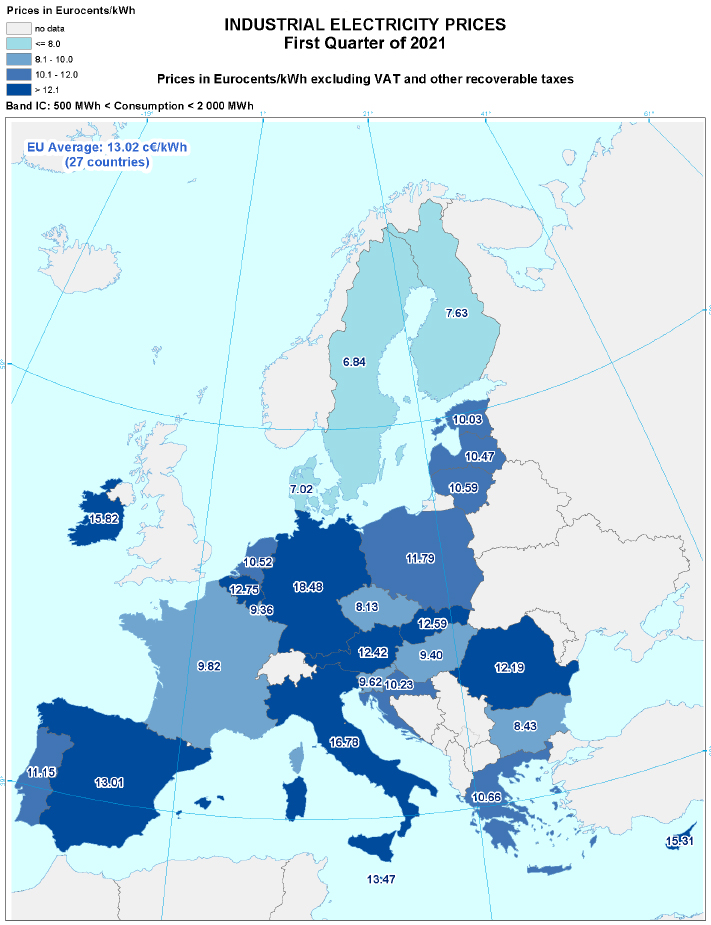 Disruption of gas deliveries from Gazprom to Bulgaria